For those following – or caring – I was last writing in the midst of a terrible, horrible, no-good, purple-spotted book slump. It was like being in the fire swamp from the Princess Bride: flame spurts, lightning sand, rodents of unusual size and worst of all: deeply terrible stories.

Fortunately, I managed to stagger through, out into the light, and when I did, I was clasping Kathleen Gilles Seidel’s Again.

This was the book that single-handedly pulled me from the miry clay and set my feet back up on the rock of good writing again, (and if you think this is dramatic, you clearly haven’t read 31 duds in a row and despaired of finding solace betwixt the pages of a novel ever again.)

Again is an earlier novel of Kathleen Gilles Seidel.

I found it browsing through a charity bookstore; the cover was falling off and the first three chapters had been paper-clipped together, which intrigued me, and  I could have been wrong, but it all felt like a lamp bobbing along the path ahead of me, so I shelled out more money than I thought it was worth and trotted home with it clutched in my hand.

My copy has the swirly embossed metallic writing on the cover that all romance novels from the nineties seem afflicted with, along with the prerequisite bunch of flowers. 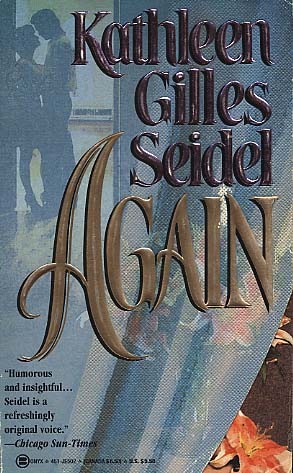 This was I think an attempt to distinguish itself from the eighties urge to have half-naked Fabios clutching female bosoms on almost every romance novel that came out, and to signify to the world at large, that although mainly for people with ovaries, there were also SERIOUS contemporary issues being discussed between these pages…

Ahh – first world problems – the grist of all good romances.

I have a secret soft spot for these types of romances; and the more I go back and read them, the more I think that at least at this point in time, we weren’t doing too badly in the plot stakes.

Again, is the story of Alex Cameron and Jenny Cotton.

But it is actually more than that. It’s also to the story of Brian and Rita, Trina, Karen, Barb Ellen, and Pam, Terence and Gil.

On top of that, it is the story of Lady Varley, Sir Peregrine, Lady Georgeanna, Amelia and the Duke of Lydgate, Lord Robin; in fact there are so many people/characters involved in this story, that at times I felt like post-it noting their shirts with their names, just to keep track of them all.

Jenny is a screen writer for My Lady’s Chamber, a regency soap (more Upstairs Downstairs/The Duchess of Duke Street than Downtown Abbey). It is her entire creation – the characters, the plots, the WORLD is of her making. Jenny lives with Brian, her boyfriend/partner of 14 odd years, and she is just starting to reach mainstream success with her series.

Alex is a former, slightly disgraced actor, who loves the life and work of soaps. He was once extremely successful, but one torridly catastrophic series later (with his name as the hook) from which he was fired, and he is out of work, black balled from the industry and looking for a quiet place to lick his wounds.

Jenny gets Alex on the show and the story and their relationship starts from there.

What I really liked was the slow developing pace of the plot; the minutia and day-to-day life of both the soap opera and the story of the characters within the soap are intrinsically linked. Organic development within the real world, connects with, impacts and changes the story and people on the soap.

There are plots galore running about; twists, changes, tangents and loose ends, both within the TV series and within the lives of the people making the series. As the story gains momentum, as the lives of the characters (real and fictional) become more deeply interwoven; there is a sense of things unravelling, twisting free and breaking off. In the hands of a less skilled writer, it could have been an epic disaster.

But not so Ms Reidel, she, like an ever attentive dog walker holds all the leads, connects all the collars and walks them all out with nary a trip, tangle or bitten ear. It’s all controlled, and generally feels effortless.

The first two thirds of the story are told mostly from Alex’s point of view, which is refreshing. He has a well-defined voice and feels mostly male.
My own personal peeve is that he has got soo much of his shit together, he’s practically incandescent with upstandingness and rectitude. Any faults (of which are few), are all those sort of reverse faux faults people tend to talk about at job interviews: oh – I tend to take on too much responsibility; I care too much; I am too much of a leader; I am a paladin of pissing virtue.

But then even this acknowledged:

‘Why did he always do the right thing? Jenny glared at the monitor.Where did he get off being so perfect all the time? Why couldn’t he screw up once in a while like everyone else?’

Jenny on the other hand is a hot mess; completely in denial about the horribleness of Brian (who I won’t even discuss because he makes my blood boil so much I want to find a cat to scratch his nads off), naive and sacrificial; she works out her inner relationship issues via My Lady’s Chamber plots and characters. Her sense of self worth has been gradually and systematically trodden down to grass level via the (soon-to-be-ball-less) Brian; and her relationship with Alex corresponds with her growth of self.

It is a bit slow in places, and if you are person that likes a canvas painted with the broad strokes of palette knife, rather than detailed flourishes, then this is probably not the story for you. But the sense of world-building is spectacular and the immersion into the life and times of the characters and their subsequent My Lady’s Chamber characters is deft and absolute. So much so, I got back out my series of Upstairs Downstairs and have started watching it again.

There was only one place that it really fell down for me: (WARNING: mini-rant ahead)

There are some minor issues of slut-shaming which I was disappointed by. Both men and women making crude comments about Rita, her body and (although there isn’t a lot of proof for it) her promiscuousness. Sure, she wasn’t a particularly nice person,  but making Brian the bad guy was enough, Rita didn’t need to be added to the mix with her youth and general bad taste in men and she certainly didn’t need to be denigrated for any overt dressing or perceived sexual appetite.

It strongly contrasts Jenny: not liking sex particularly, not feeling like she was any good at it, and tots blaming herself – even though Alex knew it was all Brian’s fault; as the Madonna; and Rita: young, perky, sexually active; wearer of inappropriate flesh baring clothes, as the Whore. Maybe I’ve become a little prosaic, or have read far to much YA fiction, but the dismissal of a person because of the clothes she wears or how sexual she appears, just really makes me cranky. But it was the nineties, tall, dark and misogynistic was very much alive and kicking…so I’m giving it a pass  but only just.

An interview with Gilles Seidel has her talking about how she likes to ground her works in some reflection of sociological and economic truth as well as psychological truth is important to her. And that does show through in the story, more often than not it is about Jenny’s growth and perception of herself that takes centre-stage, leaving the love story (gasp!) slightly in the background. But it completely works. I like that it’s not love the fixes everything and makes it ok. It’s Jenny and Alex, both mutually changing and evolving and becoming self-aware in different ways that brings perspective and ultimately maturation.

The HEA is there – but it isn’t the whole POINT. How healthy is that???

‘That’s what soaps were about: families, connections, blood. The family stories held everything else together. A soap had to have families.’

And I would have to say the same is true of this story; like any good soap opera, its messy and complicated and a little bit overwrought. But it IS about families, connections and blood and not only does that hold it together; it elevates from main stream to a little bit special.

So whilst my inner Cinderella wasn’t waltzing with some bluebirds and a couple of mice at this; my more rational, logical side appreciated the emotional maturity and commentary on actual real life.

If this book was a food; it would be that cafe-staple classic: Ham & Cheese toasted Focaccia – where the ham is salty, the cheese is goey, and the rosemary on top add crunch to the rather substantial carbohydrate. Sure, you could find them in every psuedo cafe, diner and truck stop along the freeway, and there were TERRIBLE versions of them; but if you got a good one??? Like Again? Total Satisfaction.