There is always an element of danger when going into a re-something: a re-imagining, a re-telling, a re-working. Paul Beimers suggests it is because a story teller is then only left with a ‘very thing line to balance their creativity on.’ Too similar, we’re left asking what’s the point; too different, and the reader is wondering why call it a re-telling, if it diverges so far from the source material it’s actually not a RE-TELLING?

There is also, I think, another element of danger for the reader as well. A bad re-working of a beloved story can leave horrible scars that forever change the way you view characters and events. (I’m looking at you Solsbury Hill…) It can divide readers and fans, cause riotish arguments and make flack fly in all sorts of directions.

I’ve found there are generally two types of re-telling peoples:

I fall into a third category – in which I am probably not alone, but as yet haven’t met anyone who was also in it….but hey – there’s definitely room for more on the wagon.

I feel about different books differently. Some I love re-tellings of; some I hate, and some I have NO-DON’T-EVEN-THINK-ABOUT-REWRITING-THIS: DON’T-YOU-DARE..>!!!! feelings about.

I will break down my rules for you. They are arbitrary, steeped in childhood prejudice and based in no logic whatsoever:

Thus with this premise in mind, I present to you Re Jane, by Patricia Park. 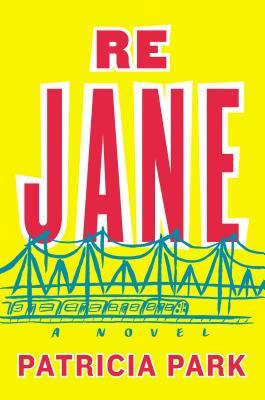 My understanding, going in was that is was a RE-IMAGINING of Jane Eyre. A contemporary Korean American retelling of Charlotte Bronte’s inimitable classic. It looked modern, bright, full of potential…But having learned from bitter experience, and previous forays in to this type of thing, I kept my expectations low. So, say, anything above a blank piece of paper was going to be a good thing.

Jane Re is a half Korean, half American orphan. Well sort of. Her mother is definitely dead, her father, abandoned her and her mother somewhere along the way in Korea. Jane had been sent over to that halcyon country known as the Land of the Free, when she was very young, to live with her Uncle and Aunt and cousins, in Flushing, Queens.

My previous experience with Flushing and Queens:

She was working in a bridal shop in Flushing, Queens.
’till her boyfriend kicked her out in one of those crushing scenes.
What was she to do?
Where was she to go?
She was out on her fanny.

So over the bridge from Flushing to the Sheffield’s door.
She was there to sell make-up,
but the father saw more.
She had style!
She had flair!
She was there.
That’s how she became the Nanny!

When we first meet Jane, she is working herself quietly to depression and death in her uncle’s grocery store. She longs to leave both it and Queens behind, but lacks the job, money and ability to escape. Her only friend Eunice leaves to work at Google and Jane is left to bear what looks like the brunt of her aunt and uncle’s displeasure and basically be a slave for the rest of her life.

Salvation and relocation comes in the form of a opportunity to be a live in au pair for the Mazer-Farleys, two professors, and their adopted Chinese daughter, Devon, and from there PLOT, STORY and REASONS unfold.

If there is one thing I rate very highly in this book, it is the writing. It is beautifully wrought; descriptions of people and places are particularly well done. They feel a little like lightning quick sketches and character studies in black ink; capturing essence and nuance and distilling it down to its bare components, but at the same time, hinting at so much more.

‘We were stuttering our way out of Queens. The 7 train was like that: Tourettic. The lights blinked on and off; the rickety train cars jerked from side to side as much as front and back. I stared at the other slumped passengers. The faces repeated in a pattern: Korean, Hispanic, Chinese, Chinese again, Indian. You could always tell by their worn expressions that they were going from home to work. You could always tell by their worn shoes: sometimes high-top sneakers with the backs cut out to form makeshift slippers, sometimes pleather platforms or paint-splattered construction boots—all sharing the same thick rubber soles, designed to absorb the work of the day.’

Like Jane, they are sharp and quick and clever, but unlike Original Jane (OJ) they can be also a little mean.

‘Mrs. O’Gall had that unwashed smell the elderly sometimes had, one that made you think of brown paper bags left out in the rain and chin whiskers and absentee adult children. It was the smell of abandonment.’

‘The Korean Protestants, unlike their Catholic counterparts, seemed to multiply like Jesus’s five loaves and two fishes.’

Don’t get me wrong, there are some laugh out loud funny parts too, particularly once Jane moves in with Mazer-Farley’s:

“A long time ago, in a land far away . . .” Beth started, stopped. “That’s always been a problematic beginning for me. Asserting ‘nearness’ and ‘farness’”—her fingers crunched into air quotes—“just screams cultural imperialism. As if our geographical locale is somehow the normative? Although, I suppose, a counterargument could be made that the Chinese—”

As Jane struggles to fit in, and find her space in their cluttered and chaotic lives, whilst trying to bridge the difference between her previous existence and her new-found freedom, there are some very nice contrasts:

“Stories of the past were never a part of the dinner fodder at 718 Gates Street. Sang had not been there when that “bad thing” happened; he’d left Korea for America years before. All he ever offered up about my mother’s life was contained in three terse sentences: “Long time ago she use to listening your grandpa. Then one day she stop. Now she dead.” He’d always pause before adding, “Is why you specially better listening your aunt and uncle.”

There is however, an overall tone in Jane’s observations that smacks of a level of superiority in her character I just didn’t like.

She didn’t like her previous life (understandable – it was pretty crap), but as she is inducted into the Mazer-Farley chaos of feminist lectures, organic food, veganism and the THE MAZER-FARLEY HOUSEHOLD: A PRIMER (LAST UPDATED SEPTEMBER 2000) (which was very clever), she is still very much a cynical observer.

‘In fact, I was starting to pity her. It was as if Beth had no girlfriends she could hash out all her problems with. She was the one who needed to go back into therapy. But I could never hope to express those thoughts aloud. So each week I’d endure our sessions up in the attic as Beth rattled on and on, caught in an endless loop.’

When it all goes pear shaped and she flees to Korea (for an all-alone-in-the-world orphan, she certainly has a lot of places to escape to) she still watches, and judges from the comfort of her own condescension.

I realise I am making her sound rather unlikeable, and by and large, Jane is not a BAD or even unlikeable character, but she is NOTHING like Original Jane. There are some parallels in circumstance, maybe, but that is all.

I think the inherent failing in this book is that it touts itself as a ‘what if Jane Eyre was a Korean/American in 2000 in Queens…?’

And that, reader, is where it loses itself.

If it had just been a story of a girl, reconnecting with family, finding a balance between cultures and her identity within that – it would have been fascinating and a definite 4 star read.

The very act of aligning itself with the classic, diminishes its impact. I am immediately searching for correlations, links and hidden subtext, and despite the initial premise, very little about Re Jane, is similar to Jane Eyre.

My biggest beef was with the Mr Rochester character (who I have abided a not-so-secret crush for, since I read it in the 5th grade). The Ed Farley version is…horrible to say the least. He is weak and apathetic, led and controlled by female presence, pedantic and wingey and just plain OLD, if not in fact, then definitely in spirit.

The Original Mr Rochester was cold and harsh and tortured and unable to express his emotions – but he was quick and funny and quixotic and charismatic. His love for Original Jane (at least to me anyway), was that BIG LOVE that crosses borders and time and space and hints at the supernatural. Jane and Mr Rochester were like two souls becoming one, two halves, finding each other across the infinite. Their’s was a love that broke boundaries, spilt infinitives and sacrificed itself for the other.

Jane Re’s and Ed Farley’s love (if you can call it that) seemed based in escapism, location and lack of alternative. Ed Farley had no crisis of conscious regarding an affair with Jane, and even worse, his wife wasn’t mad or locked in a tower, she was just mad and had the run and control of the household.

Original Jane ran to the moors, rather than break down and give into the passion that she felt for Mr Rochester, but Jane Re? She gave into anyone who wanted a shag (there were a few that did). Although I do have to say, the culminating sex scene between Jane and Ed Farley, is one of the most horrifyingly awkward scenes I’ve ever read. It was hilarious in its awfulness and I think should be made to be read by any teen who is wondering if they should give it all up for next the pimply pubescent guy whose sweaty hands wander across their hips.

An aspect I did like, was the way language and its subversions and changes through countries and cultures, seemed to reflect Jane’s internal struggle to find her own identity within the contrasting worlds.

‘Obuh—presumably from the English “overboard”—was another adopted foreign word that had drifted its way into Korean. It shed its extraneous second half, its harsh Western contours. As it circulated from tongue to tongue, the word grew smooth and round, like a pebble washed up on shore. Now it made its home here, assimilated among its Korean counterparts. But the word was no longer recognizable from its native form.’

This Jane, is unwieldy, ungraceful and very unlike the original, and that makes me a little sad. It’s also VERY different in plot from the original story, so if you are going in expecting a HEA/ Mr Rochester/Jane/Adele/Mad Wife/Dead Castle/Windy Moors/St John experience:

If however, you are interested in life and culture and assimilation in early 2000’s, of variety, substance and longing for home; of beautifully wrought loneliness, and that burning need to find family and belonging in the midst of the vast and chaotic world?

Check out Re Jane.

But then really, what is?

Have you a favourite re-telling? Are you a lover or a hater? Do you have specific re-tellings you will read or not read? Will you join me on my bandwagon? (there’s plenty of room… 🙂 )

ValancyBlu: currently re-watching Jane Eyre in an effort to erase the substandard-ness of this version. (The Fassbender adaptation; not the terrible one with Toby Stephen who makes kissing noises like a under-trained puppy (trust me reader, its true!) 🙂

6 thoughts on “RE JANE, Patricia Park (or an analogous Jane Eyre)”