I am nosy by nature. I like ferreting out information, seeking clues, finding answers and generally just knowing.

My previous life was filled with research, statistics, funding submissions, quotas and quality management. Research had become a chore. Something that was required to back up statements like

‘we found that 63.72% of clients filed for bankruptcy, because of gambling debts.’

And ‘quantitative data suggests that whilst instituted administrative management programs are effective, self actualised learner centred programs are highly effective.’

My current life is so far removed from that, that researching now is whatever I feel like investigating. Whatever strikes my fancy, whatever scrap of information falls into my hands can become the flaming torch I follow into the night.

It sounds dramatic. I know. But if you are a researcher by nature, rediscovering your love of it, feels like you have slain a dragon or at the very least escaped a troll that lives under the bridge. The localisation of the world via the internet and social media helps me feed this addiction without recourse. Archives previously only available through rigorous background checks, letters of recommendation and white gloves, are now available at the click of a link.

Just last week, I downloaded a family diary/cookbook from 1655 – converted it to an epub and read it on my kindle. All the ‘s’s were ‘f’s. It was awesome. It makes me feel like some sort of archeologist. I am Indiana Jones. The Internet is my Biblioteca di San Barnaba; my macbook is the cordon post. I too, puzzle librarians with strange noises…

Books I would have spent hours, if not days searching for are now free to borrow (thank you Open Library).

This makes KNOWING things very much easier. But it also means there is now SO MUCH available I have to be a little circumspect about what I get lost in. I try to make it relevant to my life and interests in general. So it can tie in, neatly, and in a rationalised fashion.

So this week, I have been researching Sheikhs.

In the name of science of course.

(incidentally, don’t you think he looks a little like Richard Gere…?)

The whole Sheikh thing has never been something I’ve read. But they are a THING, which means there must be something there, so I INVESTIGATED.

Did you know that in 2005, 51 million desert or sheikh romances were sold around the world?

Did you know there is a DATABASE dedicated to the SHEIKH romances????

Did you know there is SEARCH by Plot & Theme?

I do still have some questions as to the veracity of the theming of certain stories…I mean, what if you get kidnapped, but it is by an ANGRY Sheikh, rather than a HANDSOME one? Or why Alexandra Sellers, Sheikh’s Woman, described as the heroine awakening in a hospital, confused, to discover that she is mother to a newborn, and wife to a steely-eyed stranger, is filed under AMNESIA, rather than BABIES & RESCUE. But perhaps I am being too picky, or it’s not a completely fail safe method…

I thought I would make an un-informed choosing, at random, read them all and see what I found. My selection was scientifically decided through a method I like to call: write-out-all-the-titles-throw-them-into-a-box-and-pull-out-6.

Truthfully, I am a little sad that Blue Jasmine insisted on being the outlier; the alphabetical tyrant inside desperately wanted all the titles to start with ‘The Sheikh’s…’

So, things I have since discovered:

There is of course a repetition in these stories, and the set up is usually the same:

Almost all of them end up with the heroines being in the real/faux Arab country, where they are transformed into unconventional beauties, where they find themselves in the desert, and where, in the midst of the modern and the traditional, they get to have it all.

It’s nice and all, but not that much different from any other category romance.

Of course I am only basing this judgement off six different novels…And (un?)fortunately, it didn’t include any of the much lauded or decried Penny Jordan or Johanna Lindsey ones. (I couldn’t cheat and include them, as much as I wanted to — it would be a complete disparagement of my impartial research method (!)

There are some stories that elevate above this stereotype though, even in my sample group.

The Sheikh’s Unsuitable Bride, by Liz Fielding, is one that manages to do this, and of the 6, is probably my favourite. 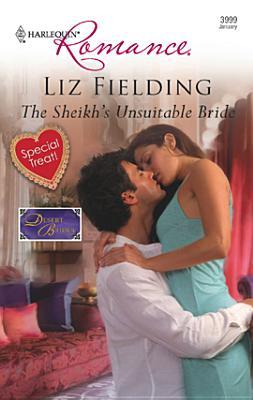 Diana Metcalfe, a single mum, and a chauffeur, lands a job driving about Zahir (sheikh) whilst he is in the country. Diana doesn’t blend into the background, and in a nice twist, it is her showing him the expanse of her city, on unplanned detours, that creates their relationship and love. There are of course the traditional sheikh elements: brokering marriages of convenience, visits to desert kingdoms, long pensive staring out of penthouse suite windows etc; but both Zahir & Diana are refreshingly individual.

The Sheikh’s Bride, Sophie Weston, was also intriguing in its differentiation from trope. 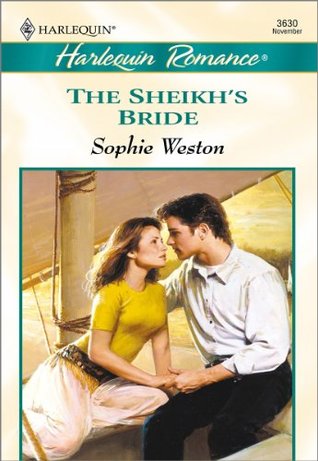 Leonora Groom; an heiress in disguise, desperate to be loved for herself and not for her father’s money; meets Amorel-Barbary, a sheikh, tired of the ease with which women fall into his bed (also mostly because of his money). There is an initial wooing under a Nile star-lit sky, but mostly there are angry altercations, and people getting engaged to the wrong people to punish other people. Leonora (Leo) is feisty and determined and an excellent deviation from the normal heroine.

There, are of course some clankers: The Sheikh’s Bidding, Kristi Gold, was so terrible, I couldn’t even bring myself to finish it. 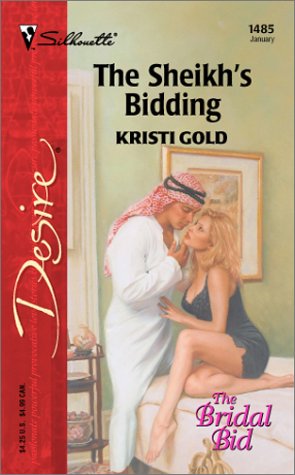 It was a trite piece about previous lovers who met again under different circumstances; Andrea Hamilton was an idiot, her child even less interesting and Sam (sheikh, who pretended to not be a sheikh in their first encounter) could have done infinitely better.

The Sheikh’s Proposal, Barbara McMahon wasn’t that much better, but interesting as a marriage of convenience plot. Really not that much different to a Regency romance, just slightly different clothes. 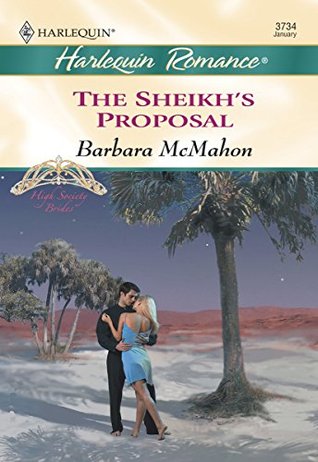 One that was equally as terrible as it was interesting was Blue Jasmine, Violet Winspear, 1969.

The blurb from the back (because it’s too good to be messed with):

“You will go to a lonely place in the sands of the desert,” the Arab diviner warned Lorna, “pursued by a man with dark hair.”

Lorna scoffed. Her plans would not be spoiled by foolish tales.

But she was wrong. For now she found herself held captive by Kasim ben Hussayn– a man with the power to make people love him. Lorna wanted only to hate him!

This was a total tale of Stockholm Syndrome, complete with a harem, a prince and crushingly fierce embraces. It makes the modern sheikh look positively tame in comparison, and is completely hilarious/appalling in its depiction of the land, the hero and the heroine:

`The desert is like a woman,’ he murmured. ‘Seductive and challenging, with depths in which a man might get lost forever. I have known it in all moods, yet each day its sweeping spaces offer something new. A fresh challenge, a certain torment, and then at night it’s cool caress, or its crescent moon—the claw of the lover.’

`A woman has to be handled as one handles a spirited filly, so that she feels the tension of the rein and won’t lose her head.’ He lounged on the divan and stretched a booted leg; his cigarette smoke half-veiled the expression in his eyes.’

‘She felt the flick of tawny eyes. ‘Have these weeks as my guest taught you so little?’ he asked. ‘A real woman likes to feel that she is mastered. She enjoys her fear of the man who is unafraid of her.’

The worst award however, is reserved for The Sheikh’s Revenge,  by an Emma Darcy, who really should have known better. 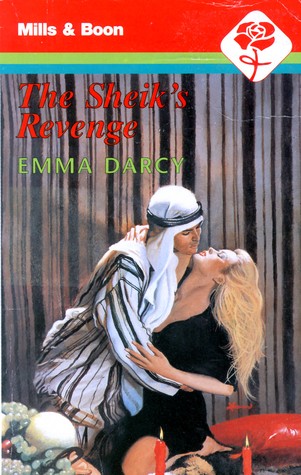 From an outsiders perspective, there is a lot that the genre is disparaged for: forced marriages, revenged alpha-males and rape as a plot device; not to mention the over-sexualisation of middle-eastern men, and the under-sexualisation of western women…

Well, wrap all that in a dubious cover and tie a ribbon on it, because that is basically the plot of the prosaically named Sheikh’s Revenge.

As a sub-genre, which found its roots in E.M.Hull’s The Sheik* first published in 1919, there have been some interesting ups & downs, particularly in terms of publishing.

Four out of the 6 novels I read were written post 9/11, and according to Hsu-Ming Teo, 2002 saw a peak of 22 different contemporary sheikh romance novels as well as four historical harem ones…not even taking into account the explosion of Contemporary Desert Romances

(There was also accompanying nifty graphics)

Hsu-Ming Teo suggests that the revival of interest in the Sheik Romance is not so much the current events of the Middle East, but more a culmination of factors including:

Her book is amazing by the way — meticulously researched and oh-so interesting, I spent way to long reading about ‘sexual fecundity and sensual appeal’ and gender juxtapositions within the genre…

And in researching this, I have come across things which I hadn’t even realised were THINGS.

I have read about the fetishisation of whiteness in heroines; that desert/sheikh romances are purportedly an attempt to cope with the stereotyped images of fear and hatred of Muslims and Arabs in popular media by reversing them to love; and then, that these very same stories objectify people’s race and exoticism or ‘otherness’ and create relationships based on that racial difference. I have seen catcalls of discrimination, the elevation of a single word (i.e. sheikh) to encompass and imbue an entire genre trope – which is a pretty powerful thing.

At worst, Desert Romances seem like a an endorsement of a view of rape as a viable method of liberating women from their own culturally induced frigidity, and at best a incongruous mix of cultural stereotypes and a insubstantial critique of them.

I do wonder though… why are all the heroines seem to be so very white? They are from England or Australia or North America. In this world of deserts and sands and differences, what about people from other countries? Spanish or French or Italians; Chinese or Russian? Don’t they ever meet Sheikhs? Aren’t they ever intrigued? Are there romances out there about cross-cultural relationships that also end up in the desert? Are there any poor sheikhs? I would be interested if there was a reversal in fortune and a rich heroine bailing out a poor prince….?

I don’t know, I haven’t read enough to find that out. I am intrigued though. I’m not sure I am a complete convert, but sheikh romances have edged in on the outer limits of my interests.

If I come across one whilst wandering through a bookstore – I may look deep into the tawny depths of the brooding sheikh’s eyes, with his panther-like grace, and cheekbones you could cut glass on – and I may not turn him down…

Valancy: needing a break after all that testosterone; and now on the search for a beta hero book: someone who’s neat, an excellent cook, and files their tax returns on time.

*Also made into a silent film in 1921, which can be watched here

4 thoughts on “Banished to the Harem? (or my foray into the world of sheikhs…)”