Isn’t funny how books slip through your memories?

When you are first discovering them, reading them and subsequently being enchanted by them, you think you are NEVER going to forget them, or their impact in your life.

You cry and squee and languish, right along with the characters.

You hug them quietly as you slowly close the last page and sigh that deep heartfelt exhalation of breath that means: it is finished and it was GOOD.

Then you place them on a shelf, promising you will come back to them later, when you’ve forgotten them a little; when the solid impact of their presence has dulled slightly; when you are ready to fall in love again. But time, and TBR’s get in the way. Life moves on. Quiddities change and those books slumber quietly away on the shelves, forgotten.

Well, this post is dedicated to those poor neglected favourites; those overlooked, under appreciated and disregarded treasures that we were SO sure we were never going forget…

The Archive of the Disremembered.

I discovered Eva Ibbotson by way of Lorna Hill’s Sadler Wells series; because if there is ONE thing I can’t go past (a part from food romances) it’s BALLET stories.

Yes, I was that girl that watched, bought, watched and re-watched Centrestage until I wore out the video. I always wanted to be a ballet dancer. To be graceful and nymph-like with long straight hair that could be wound up into a bun.

This is completely disregarding the fact that I hadn’t a hope of taming my hair out of its determined curling and have the rhythm and musicality of an even-toed ungulate.

there are more of us then you’d think…

Eva Ibbotson’s non-children works are a curious beast. They are a hybrid: of what young adult has since become; what Victoria Holt & Mary Stewart were (sans the gothic tone) whilst still retaining that cheery boarding school Blyton-esque feel that imbued the Mallory Towers, Fifth at so-and-so, and the Famous Five adventures.

Her heroines are willowy and entrancing, their innocence could be nauseating, and their complete ability to be at the epicentre of serendipity thus always landing on their feet? Priceless to behold.

But beyond that, is Ibbotson’s ability to capture mid & pre-war life in deft strokes and to condense character insight at a shrewd and masterly level.

A Company of Swans, is one such story. 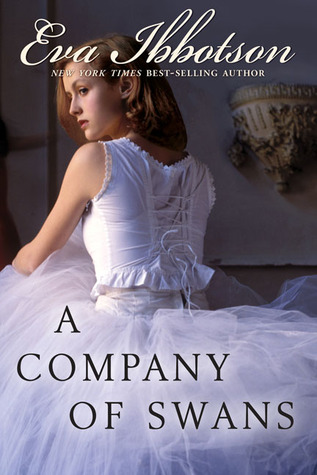 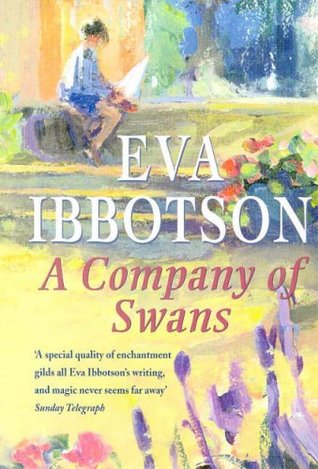 Set in pre-war 1912, 18 yr old Harriet is the perfect protagonist-in-waiting for an adventure.

Residing with her stuffy, pedant father and her miserly, penny-pinching aunt, her existence is drab in the extreme. Forced to leave school because her father doesn’t believe in ‘women in education’; suffocatingly courted by the MOST boring suitor alive, Harriet is as Macbeth:  ‘cabined, cribbed, confined, bound in to saucy doubts and fears.’

“Don’t let me give in, God,” she begged, tilting back her head, sending the long soft hair cascading down her back as she searched the quiet, dove-gray sky of Cambridge for some portent—Halley’s comet; the pointing finger of Isfrael—to indicate deliverance. “Don’t let me marry Edward just to get away from home. Don’t let me, God, I beg of you! Show me some other way to live.”

Fate, God or as Harriet called it ‘serendipity’ intervened in the guise of ballet. With an opportunity to join a dance troop, Harriet runs away from home, joining them on their Amazonian tour. There she meets Rom, a mysterious and prosperous British exile with a haunted past.

Pasts are dug up.

A lot happens in a relatively short space of time.

There is admittedly a lot of coincidences and ingenue exclamations, but the inherent heart and tone of ACOS is sweet, plaintive and wistfully beautiful.

My re-read was interesting; on the one hand, I completely remembered how I felt the first time round; the sweetness of the story, the liberally scattered dance references, the chummy sisterhood of the dance corp…but I noticed things, people, THINGS that I hadn’t before.

The Really Big Book of Misunderstandings:

Almost every plot point and character decision seems to hinge on Misunderstanding, often, as a deliberate result of deception. To such a point that I stopped rolling my eyes and started wondering if Ibbotson was making a wry satirical statement and hiding it amongst a plethora of tulle and en pointe…

The following could be spoilers…avert ye eyes if you don’t want to know.

I wanted to do this whole way through:

Which made me wonder: was that the point? Was this Ibbotson’s way of making statement about twisty meta-fictionalising (I don’t care, I am making it a word)

Or was it just a lazy way of rationalising the story arc?

Further to the idea of meta-fictionalising: The dues ex machina is clearly identified as such:

‘At which point there entered a deus ex machina. It entered in an unexpected form: that of a lean, rangy and malodorous chicken.’

Which also shows just how good Ibbotson’s descriptions are.They are beautiful to behold. They do verge sometimes on the over-exclamatory, over-impassioned feel of LM Montgomery, especially when describing countrysides, dance or when character are rhapsodising lyrically over Harriet’s GOODNESS; but I was ok with that.

Mon Dieu, that house—it was like a grave! After an hour she offered me a glass of water and a biscuit—one biscuit, completely naked, with little holes in it for drainage.”

Small actions and descriptions are used to sum up substantial character traits in a dry acerbic voice that doesn’t mock, but instead invites a wry amusement of the foibles and peculiarities of people. Until such time as it is detrimental to Harriet, or an innocent, in which the tone turns caustic and carries a sting.

It was the Tea Circle ladies who, through Louisa, decided what Harriet should wear…where she could go unchaperoned; it was they—scattered like an army of secret agents through the town—who reported to Louisa when her niece removed her gloves in public or had been seen talking in far too friendly a manner to a shop assistant.

Eugenia Crowley, twitching with responsibility, and Millicent Braithwaite—a deeply muscular figure in a magenta two-piece and kid boots—performed a neat pincer movement, placing themselves one in front of and one behind the seat which contained Edward and Harriet—and the bus set off.

Which also shows how superbly realised all the secondary characters are.

From Edward, the most boring suitor alive:

His supervisor had been perfectly right when he said that fleas were virgin territory… but before he placed the next slide under his binocular, Edward allowed himself a long and lusting look at the serried rows of butterflies pinned in cases on the wall above him. Fleas were Edward’s bread and butter, but the Lepidoptera were his passion.

The creation of brown-eyed blondes has long been regarded as one of God’s better ideas. Marie-Claude’s eyes were huge and velvety, her lashes like scimitars, her upturned mouth voluptuously curved. To this largesse had been added waist-length golden, curling hair which, had she chosen to sit on a rock brushing it, must have sent every sailor within miles plunging to his doom.

Marie-Claude, however, did not so choose. She was entirely faithful to her fiancé…and though occasionally willing (if the price was right) to emerge from a sea-shell at the Trocadero or sit on a swing in some nightclub clad only in her hair, she did so strictly to earn money for the restaurant which she and Vincent…were proposing to open in the hills above Nice.

Even Aunt Louisa (*shudder*) is a fabulously described tightwad:

‘Number 37 Scroope Terrace, off the Trumpington Road, was a house where “Waste Not Want Not” was the motto. Louisa Morton counted the fish-knives on Thursdays and the silver plate on Saturdays and kept in her bedroom a box labeled “String too short to tie.”

Cook motioned her head toward a large plate on which a coffee blancmange…still shivered faintly. “I’m going to stick glacé cherries round it,” offered Cook.

“I must say that seems a little excessive,” said Louisa. She frowned, thinking. Still, it was a dinner party. “All right, then—but halve them first.”

Neither does Ibbotson veer away from the darker side of life; she acknowledges the mistreatment of native workers in the Amazon, very clearly describes (what can really only be called) abuse of Harriet by her family, and even recognises the awareness of the almost uncontrollable rage Rom feels towards Harriet’s relatives.

And to add to all that, you get a fairytale ending and a happily ever after.

What more could you want?

For a new read or a re-read, Ibbotson is delightful. Like Lemon Lime & Bitters; a little bit sweet, a little bit tart and deliciously old fashioned.

2 thoughts on “A Company of Swans, Eva Ibbotson (or The Archive of the Dis-Remembered…)”