The munificent and benevolent Wendy the Super Librarian’s TBR Challenge this month was Contemporary.

Just warning y’all right now —— I ain’t be so big of a fan. Not that I have a definitive or particular reason for disliking them…but I seem to be a big ‘ol magnet that attracts TERRIBLE contemporary romances. I have mostly expelled them from my TBR…but there are still a few loitering about with intent, and when I saw the challenge I thought: hey? Why not get rid of at LEAST one….

Oh, but how wrong I was.

The contemporary I dug up was Susan Elizabeth Phillip’s Ain’t She Sweet? 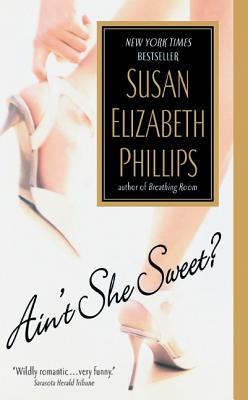 And it was WONDERFUL.

This was a faint surprise, as my last Phillips novel was a travesty.

I hated it with the fire of a thousand dying supernovas and if there was a word to describe it, I would be hard put to single one out from the plethora of synonyms that fit my feelings almost exactly: mullock, dreck, grot, gash, debitage, draff, raffle; they all pretty much meant I was hammering that last nail in the coffin of Phillip’s romances…

But this book???? COMPLETELY redeemed Phillips. I have taken her out of the black books case.

I’m not even sure what it was that captured me – the writing (which was extremely well done) the juxtaposition of role reversals, the vengeance plot that was just SO piercingly portrayed….

All of it just WORKED to make a cracker of a book.

Sugar Carey, supreme queen bee of high school was an arbitrator of right, wrong, cool and uncool. She led the SeaWillows, demanded absolute obedience and could make your life a dream or a complete misery depending on how much she liked you. She didn’t care who she hurt, what damage she wrought and how much chaos she left in her wake.

She left a terrible, horrible legacy and she didn’t care in the slightest.

That was high school.

15 years later, Sugar Beth is back. Several marriages later. Still beautiful, with a rapier sharp wit, but life hasn’t gone as well as she planned. Broke and desperately seeking a painting bequeathed by her great aunt, she lands back in town, hoping to lay low, find the jack pot and shake the dust from her shoes on the way out.

Fate, it would seem though, had other plans…

Because Sugar Beth didn’t just LEAVE town after high school; she metaphorically burnt it to the ground and left a trail of destruction and heartache in her wake.

Sugar Beth WAS NOT a nice person. She was the epitome of a mean girl. She was cruel and vengeful and cared little of the consequences. She destroyed lives and bullied and humiliated those that she deemed unworthy.

And then she came back. To face the people she’d wronged; the class mates she had bullied, the relationships she had destroyed.

In a way the entire first half of the story is an atonement of wrongs.

Our first meeting of Sugar Beth evokes enough sympathy to carry her through the novel and kudos to Phillips, she manages it brilliantly. We only see her as she currently is: a down-on-her-luck battler that desperately needs money to help keep a family member in an care facility…

It’s only as we follow her into her hometown that we start to discover the destruction and horror that she had wrought. We meet the ex boyfriend she cheated on, the half sister she savagely tormented, the teacher she lied about.

And that is where it all gets really interesting. Sugar Beth knows the only way to get through the past is to own up to it; to face it head on and to somehow make restitution; only every one hates her with a passion and is MUCH more interested in revenge.

I am not even going to talk about the hero and perfect match to Sugar Beth – it would COMPLETELY ruin it. But suffice to say, they fought like cross between Beatrice & Benedick and Mary and Vidal and were the PERFECT match for each other.

This was such a great book. Sugar Beth is tough and smart and cynical. The hero was strong and stubborn and perfectly British. The dialogue is biting. And the heartbreaking truth behind the characters and their backstories are so uniquely portrayed, it creates such a sense of empathy.

To be honest, the raw, honest depiction of the cruelty and havoc that Sugar Beth gleefully initiated and participated in was breathtakingly savage. Phillips doesn’t flinch from painting an accurate and heartless picture of her earlier character.

And if there wasn’t such a huge amount of growth between the high school years and today’s Sugar Beth…as well as a rather succinct exposition of why she acted the way she did, I think I would have would have probably DNF’d; but it was just really really good.

If you are after an enemies to lovers, atonement for the past, evil stepsister-come-good with a superb HEA….you can’t go far wrong with Ain’t She Sweet….

Also, in case you are wavering: every chapter is headed by a quote from a Georgette Heyer novel: The Corinthian, The Grand Sophy and Devil’s Cub – My TOP THREE FAVOURITE HEYERS.

I think this may have ruined me for other Susan Elizabeth Phillip novels…I mean – what if they don’t measure up????

Valancy: digging out Heyers for yet another re-read…What? There is no such thing as a Non-Heyer week!

5 thoughts on “Ain’t She Sweet, Susan Elizabeth Phillips (or the contemporary: clawing its way back into my TBR…)”